What Can Marketers Learn from Pokémon Go?

In under a week Pokémon Go has become a phenomenon, surpassing Tinder and almost Twitter on Android phone downloads – despite only being available in four countries.

The augmented reality app based game has people out of their houses, walking around their hometowns or city, interacting with other players in parks and other landmarks, and having game servers crashing from overuse.

So what’s the secret to Pokémon Go that is making it so incredibly popular? The answer is nostalgia.

News articles are cropping up all over the web discussing players taking risks such as playing while driving, ending up in emergency rooms, police departments discussing it on social media and players causing a ruckus past midnight in local parks and even outside people’s houses.

The common factor however, is that the majority of those involved in each of these situations, are adults.

Millenials are re-experiencing their childhood through the game and series that was a huge part of their lives.

“When you suck at tossing Pokéballs” – inconsistent-igloo, Tumblr

The Pokémon brand is known worldwide, and kids who had previously grown up playing with cards and Gameboy consoles are now able to virtually take part.

Players are more immersed than ever before, with the augmented reality format that Pokémon Go features – the monsters literally show up right in front of your screen.

Throw in social networking, and that famous catch phrase- “gotta catch ‘em all!” and the nostalgia behind Pokémon of the 90’s does the rest of the work. 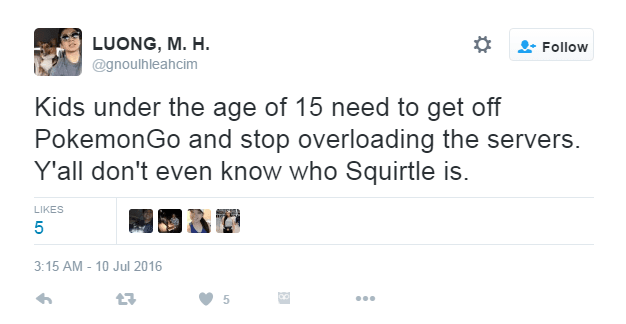 The marketing lessons that we can learn from the huge success of this game are incredibly useful, the biggest of which is the importance of timing.

Pokémon Go has been released during school holidays in Australia and the US. Kids are out of school and are looking for anything to keep them occupied – even better if it’s outside and encouraging activity.

Secondly, a good brand can sell almost anything, especially when it’s targeted well, as with millennials with smartphones. Pair this with nostalgia and you’ve got a recipe for success – most people in their twenties and thirties would have great memories of playing or watching Pokemon in the 90’s, and this gives them the opportunity to revisit the feeling of being a kid again.

Finally, less is more. Pokémon Go doesn’t really have any learning materials or tutorials. To play, all anyone needs to do is own a phone, and walk around. The usability of the game draws people in, and the simplicity and reward system in it lay the groundwork for players to get ‘addicted’.

So go out there and be the very best at what you do – whether that’s catching Pokémon, or marketing.

We provide over 26 services across 11 different countries in over 7 different languages, making us big enough to deliver and yet small enough to care. McCorkell provides large agency resources and a personal, engaged approach. We are a one-stop shop that boosts your marketing experience to get results.

We are based in Sydney, Australia with regional offices in Singapore, China and India. Our team comprises 180 staff across all our service disciplines. McCorkell has seen the highs and lows, booms and busts in many markets across its 26 year history.

We have run over 4,000 events, delivered millions of pieces of direct mail, secured countless sales appointments and dreamed up some of the most outrageous ideas with our clients over the years. Most importantly, we’ve loved every minute of what we do.