Chameleons in The Ivy. 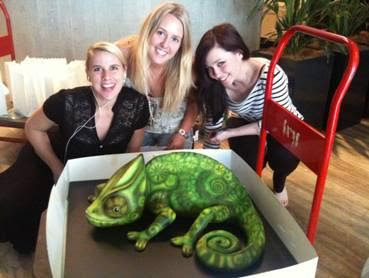 Novell guests stepped out of the Ivy Penthouse elevator’s and were engulfed, for the evening, by the jungle paradise created by the M&a team. Novell’s tenth birthday celebration transported all who attended to another world. Attendees marveled at the terrarium in the shower, complete with two frill neck lizards, and the shark fish that inhabited the marble bath.

The lavish surroundings were further complemented by the assortment of canapés on offer. A live oyster bar was opulently presented, (oyster shucker equipped) along with platters of beef carpaccio, roast lamb cutlets, semolina gnocchi and more. No hunting to keep hydrated around the ivy jungle was necessary; with the Green Apple Tom Collins and Pisco Pomme cocktails, and a selection of wine and beer, flowing like the central waterfall.

The highlight of the night was a beautiful meter long custom made chameleon cake that was so life like one would have been forgiven for confusing it with one of the real reptiles present in the room.

The Tarzan of the event was definitely Helen; who, despite sporting torn ligaments and pulled muscles, continued to be the king, or should we say queen, of the jungle. Along with Helen, the M&a crew (consisting of Cilla, Mel and James) carried the event off with cougar like precision.

We provide over 28 services across 14 different countries in over 17 different languages, making us big enough to deliver and yet small enough to care. McCorkell provides large agency resources and a personal, engaged approach. We are a one-stop shop that boosts your marketing experience to get results.

We are based in Sydney, Australia with regional offices in Melbourne, Singapore, Tokyo, Hong Kong, China, Perth and India. Our team comprises 200 staff across all our service disciplines. McCorkell has seen the highs and lows, booms and busts in many markets across its 30 year history.

We have run over 4,000 events, delivered millions of pieces of direct mail and even more emails and social media posts, secured countless sales appointments and dreamed up some of the most outrageous ideas with our clients over the years. Most importantly, we’ve loved every minute of what we do.